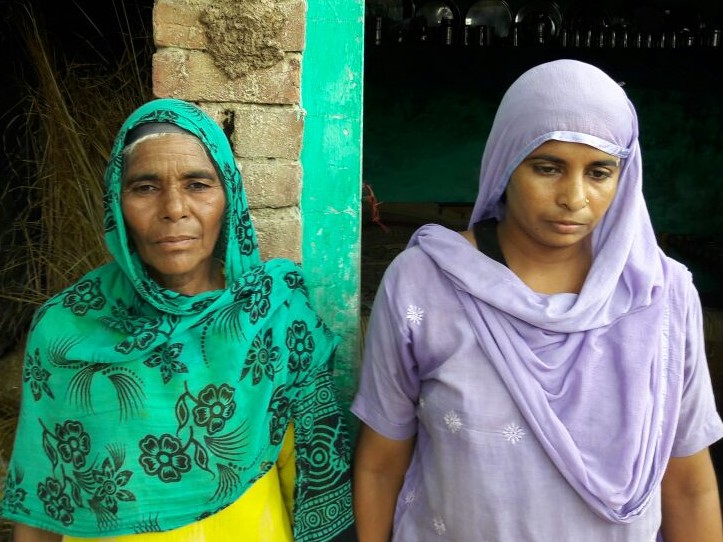 Surjit Kaur lost her husband, Gurmej Singh during the violence in Punjab in 1984. (Her husband is the seventh Shaheed in her family). Rather than finding support in her husband’s family, her father-in-law kicked her out of her own house in Fattu Dhinga (Kapurthale) and sold off the property without her permission or consent. He also refused to give her any financial compensation. She was left to care for her 20-day old daughter and provide for the both of them by herself.

Completely alone and having nowhere else to go, Surjit returned with her daughter to her parents’ house in Patiala. Since both of her parents have passed away, the house is empty, but also falling to pieces. The house consists of two rooms, one of which is used to store food for cows. The other room, which she and her daughter occupy, has very poor living conditions. The roof has multiple leaks and barely provides any form of shelter during the extremely cold and rainy seasons. The floor is made of raw earth and becomes very muddy due to the constant leaks. Furthermore, there is no form of water infrastructure or sanitation, no toilet, no kitchen or even a gas connection for anyone to cook food. Surjit never imagined she would ever be forced to live or raise her daughter in such deplorable conditions.

With no other source of income or any land under her name, Surjit makes ends meet by selling off the milk from her two cows. Most of the milk goes towards feeding herself and her daughter, but whatever is leftover Surjit tries to sell. Having barely enough to feed herself and her daughter, she cannot afford to buy feed for the cows, so she must beg other people to give her some, which she carries back to her home on her head. Surjit is now 57 years old, but she has no vehicle or bicycle to help her move around from place to place.

SAF was very moved by Surjit’s story. She was put on a monthly food allowance so she no longer has to worry about going hungry. Your donations made this possible. Food and a decent form of shelter are basic necessities that every human being is entitled to. SAF had offered mata jee to build her home but unfortunately because of some internal famly issues of mata jee, it couldn't be possible. SAF had also offered to get her daughter married off but that too was turned away mata jee for reasons we do not wish to disclose here.

Surjit is just one of the many women in India who are suffering from poverty and a lack of financial support. Women in India do not inherit land, are rarely educated or taught to be self-sufficient, and remain dependent on the men in their lives. When they can no longer depend on men, however, as in Surjit’s case, their living situations become extremely difficult. Please donate today, in order to help SAF provide basic necessities and lift women like Surjit out of poverty.

SAF has been supporting them since Fall 2016.